New signing Pierre-Emerick Aubameyang was only a substitute as Barcelona were forced to a goalless draw at home by Turkish club Galatasaray in the first leg of their Europa League last 16 tie. He was named on the substitutes’ bench for the game as Barcelona manager Xavi Hernandez opted for the front trio of Ferran Torres, Memphis Depay and Adama Traore. The Spanish duo of Torres and Traore are fellow new signings like Aubameyang, while Dutchman Depay was signed on a free transfer last summer. 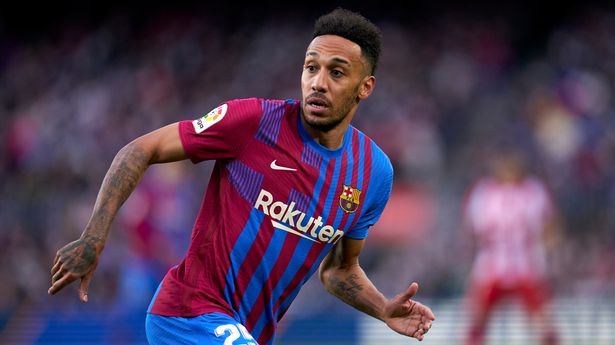 Pierre-Emerick Aubameyang was a major arrival at Barcelona during the January transfer window. The Gabonese striker joined the club on a free transfer and he was given a three-and-a-half year contract until 2025. He was able to sign for Barcelona as a free agent after his Arsenal contract was cancelled mutually on the back of him falling out with Gunners boss Mikel Arteta.

Aubameyang has been in very good form since his move to Barcelona and he had five goals in four games before the Galatasaray game. His first goals for Barcelona came during the 4-1 away win over Valencia in the Spanish La Liga last month. He scored three goals during the game. Pierre-Emerick Aubameyang made it four goals in two games when he scored one of the goals in the 4-2 away win over Italian club Napoli in the second leg of the Europa League play-offs as Barcelona sealed a 5-3 aggregate victory to move into the round of 16. Aubameyang made it five goals in three matches in all competitions with the first Barcelona goal in the 4-0 thumping of Athletic Bilbao in the league. He failed to score for the first time in four matches during the 2-1 away win over Elche in the league.

Pierre-Emerick Aubameyang came on as a substitute for fellow attacker Depay on 61 minutes as Barcelona and Galatasaray failed to register a goal at the end of their first leg clash at the Nou Camp on Thursday night. The second leg is in Istanbul next week Thursday.